Judd Stevens is a psychoanalyst faced with the most critical case of his
life. If he does not penetrate the mind of a murderer he will find
himself arrested for murder or murdered himself...

Two people closely involved with Dr. Stevens have already been killed.
Is one of his patients responsible? Someone overwhelmed by his problems?
A neurotic driven by compulsion? A madman? Before the murderer strikes
again, Judd must strip away the mask of innocence the criminal wears,
uncover his inner emotions, fears, and desires-expose the naked face
beneath...

The Other Side of Midnight

In Paris...Washington...and a fabulous villa in Greece, an innocent
American girl becomes a bewildered, horror-stricken pawn in a game of
vengeance and betrayal.

She is Catherine Douglas, a woman caught in a web of four lives
intertwined by passion as her handsome husband pursues an incredibly
beautiful film starâ€”and as Constantin Demeris, a legendary Greek
tycoon, tightens the strands that control them all. Welcome to THE OTHER
SIDE OF MIDNIGHTâ€”and one of Sidney Sheldon's most dazzling and
surprising novels of suspense.

A Stranger in the Mirror

A lonely man. Toby Temple is a super star and a super bastard, a man
adored by his fans and plagued by suspicion and distrust.

A disillusioned woman. Jill Castle came to Hollywood to be a star-and
discovered she had to buy her way with her body.

A world of predators. Here they are bound to each other by a love so
ruthless, so strong, it is more than human-and less...

Jennifer Parker is a brilliant, lovely attorney on her way up. But less
than twenty-four hours after joining the district attorney's office in
Manhattan, Jennifer finds her career threatened by a Mafia prince.
Michael Moretti is a compelling, charismatic crime lord who seeks to
expand his domain. He will let no one stand in his way...no matter her
beauty or ambition.

Thus begins this mesmerizing tale of two relentless players struggling
for absolute power in the greatest city in the world. And in their
dangerous battle is a love more destructive than hate.

Master of the Game

Kate Blackwell is the symbol of success, the beautiful woman who
parlayed her inheritance into an international conglomerate. Winner of a
unique position among the wealthy and world-renowned, she's also a
survivor as indomitable as her father, who returned from the edge of
death to wrench a fortune in diamonds from the hard South African soil.

Now, celebrating her ninetieth birthday, Kate surveys the family she has
manipulated, dominated, and loved: the fair and the grotesque, the mad
and the mild, the good and the evilâ€”her winnings in life. Is she the
master of the game?

Lovely, idealistic, she's soon to enter a life of hardship and revenge,
one that will lead her into a dazzling world of sumptuous wealth,
audacious exploits, and narrow escapes-and to a passion that promises to
fulfill all her secret dreams...

Windmills of the Gods 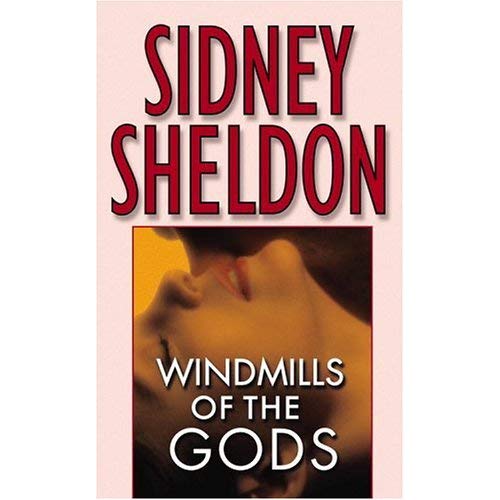 She's on the glinting edge of East_West confrontation, a beautiful and
accomplished scholar who has suddenly become our newest ambassador to an
Iron Curtain country, a woman who is about to dramatically change the
course of world events-if she lives.

For Mary Ashley has been marked for death by the world's most proficient
and mysterious assassin, and plunged into a nightmare of
espionage,kidnapping, and terror. Here, only two people-both powerfully
attractive and ultimately enigmatic men-can offer her help. And one of
them wants to kill her.

The Sands of Time

Spain. A land of eternal passion and unceasing bloodshed. From the
vengeance of a pitiless tyrant, four women flee the sacred, once-safe
walls of a convent:

Lucia, the proud survivor harboring a murderous secret from the savage
clan wars of Sicily...

Graciella, the beauty still unpurged of guilt from one reckless,
youthful sin...

Megan, the orphan seeking perilous refuge in the arms of a defiant
Basque rebel...and

Teresa, the believer haunted by a faith that mocks her with silence.

Leaving innocence but not hope behind, they venture into an alien,
dazzling world, where each will encounter an unexpected destiny-and the
truth about herself.

Shadowed by tragedy and burdened by amnesia, a beautiful woman
desperately tries to return to reality. She is Catherine Douglas,
destined to once again challenge the cruel, charismatic power of
Constantin Demiris, the Greek shipping tycoon who murdered Catherine's
husband. Now, in the glittering capitals and carefree playgrounds of
post-war Europe, Demiris sets his deadly sights on Catherine-and the
single, treacherous secret whose shattering truth is known to her
alone...

When a mysterious weather balloon crashes to earth in the Swiss Alps,
the head of the NSA handpicks Robert Bellamy to track down and identify
the ten known witnesses to the event. A man whose obsession with his
covert assignments has cost him the only woman he can ever love, Bellamy
now faces the impossible. But as he searches for clues from Rome to
Budapest to Texas, this mission blows up in his face-and rips the lid
off an incredible conspiracy that stretches around the globe and even
into space...

Alone and betrayed on every side, Bellamy must run for his life-holding
an astonishing secret and the key to the planet's very survival.


The Stars Shine Down

Lara Cameron is America's Princess, the power behind the tallest
building on earth, a self-made billionaire who towers over a
traditionally male domain, an icon of glamour and accomplishment to men
and women everywhere. Beautiful but insecure, ruthless yet vulnerable,
Lara has struggled brutally to achieve it allâ€”yet she still wants
more. And in a dazzling global setting from London to New York, from
Reno to Rome, she will find everything she has ever desired and
wonâ€”her fortune, her fame, the man she loves-swiftly and shockingly
imperiled.

Three young doctors-their hopes, their dreams, their unexpected
desires...
Dr. Paige Taylor: She swore it was euthanasia, but when Paige inherited a
million dollars from a patient, the D.A. called it a murder. Dr. Kat
Hunter: She vowed never to let another man too close againâ€”until she
accepted the challenge of a deadly bet. Dr. Honey Taft: To make it in
medicine, she knew she'd need something more than the brains God gave
her.

Racing from the life-and-death decisions of a big major hospital to the
tension-packed fireworks of a murder trial, NOTHING LAST FOREVER lays
bare the ambitions and fears of healers and killers, lovers and
betrayers. And proves once again that no reader can outguess Sidney
Sheldon, the master of the unexpected.

A power revered by presidents and kings, a fortune unsurpassed by few
people on earth: all that ended for Harry Stanford the day he
mysteriouslyâ€”and fatallyâ€”plunged from his luxury yacht into the
Mediterranean Sea.

Then, back home in Boston, as the family gathers to grieve for his
memory and to war over his legacy, a stunningly beautiful young woman
appears. She claims to be Stanford's long-lost daughter and entitled to
her share of his estate. Now, flaming with intrigue and passion through
the glamorous preserves of the world's super rich, the ultimate game of
wits begins, for stakes too dazzling and deadly to imagine.

He wanted power. Oliver Russell is fated to rise to the pinnacle of
power, the office of President of the United States. She wanted revenge.
Leslie Stewart is his betrayed fiancÃ

e, a woman dedicated to a single
purposeâ€”the downfall of Oliver Russell. Amassing her own media empire,
marshaling all her forces against him, she stands poised to destroy
Russell on the eve of his most dazzling triumph.

From Sidney Sheldon, the unchallenged master of bestselling fiction,
comes a story of blazing ambitions and thwarted love that enthralls and
surprises with every page...

Tell Me Your Dreams

Ashley, elegant yet haunted...Toni, sultry as well as
vivacious...Alette, lovely and totally without conceit...three beautiful
young women suspected of committing a series of horrifying murders. One
of the most bizarre murder trials of the century is about to begin and
reveal an astounding, startling piece of medical evidence almost
impossible to believe. Sweeping from London to Rome, from Quebec to San
Francisco, this latest tale from the world's reigning master storyteller
is so much more than a mystery: It is a searching, riveting, and,
finally, triumphant foray into the dark, wild depths of the human heart.

The Sky Is Falling

The Winthrops are America's royal family, and its Prince Charming is the
sexy, charismatic Gary Winthrop. Now the man on his way to becoming the
Senate's brightest new star is found murdered in his homeâ€”the latest
in a series of accidents that have killed five members of the family in a
single year. One of the last people to see Gary Winthrop alive is
Washington anchorwoman Dana Evans. She makes it her mission to
investigate these seemingly random tragedies, little realizing that her
search will sweep her across several continents, place her and her young
son in grave danger, and lead her to a truth that will astound the
world.


Are You Afraid of the Dark?

In four cities across the world, four people die violently and
mysteriously. The dead share a single crucial link: each was connected
to an all-powerful environmental think tank. Two of the victims'
widows-accomplished artist Diane Stevens and international supermodel
Kelly Harris-may hold the key to their husbands' demise. Terrified for
their lives, suspicious of each other, and armed only with their own
wits and guile, they must join forces in a nightmare cycle of
hunt-and-kill. At stake is the shattering truth about the tragedies that
robbed them of the men they loved...and about an awesome conspiracy
whose ultimate target is as big as the earth and as close as the air we
breathe.
enjoy